From early January through mid-February 2020, NOAA is partnering with several universities and other programs to lead the Atlantic Tradewind Ocean–Atmosphere Mesoscale Interaction Campaign (ATOMIC). The field study will take place in the tropical North Atlantic east of Barbados and investigate cloud and air-sea interaction processes with the goal of advancing understanding and prediction of U.S. weather and climate. ATOMIC is the U.S. complement to the European field campaign called EUREC4A. This collaborative effort involves a unique combination of ships, piloted and remotely-controlled aircraft, and remotely-controlled ocean vehicles to characterize ocean and atmospheric properties. A suite of instruments will be deployed from NOAA's research ship Ronald H. Brown and WP-3D Orion "Hurricane Hunter" aircraft, and on land.

The focus area of ATOMIC is in the heart of the trade winds and representative of other regions across the global ocean with shallow convective clouds. Some of the Earth’s largest ocean eddies (circular currents) also shed into this region from the Amazon and Orinoco Rivers. Conducting the study during winter allows researchers to observe the ocean, air, and clouds in near isolation from hurricane impacts, and to gain better insight into the ocean's involvement in making clouds that affect larger weather and climate patterns.

Improved understanding of air—sea interactions in this region will help advance representations of these processes in NOAA’s model forecast systems. This effort will also improve the numerical guidance used to predict weather and climate extremes.

ATOMIC is supported by the NOAA Climate Program Office Climate Variability and Predictability Program, NOAA UAS Program, and NOAA Physical Sciences Laboratory (PSL), with additional participation from the National Aeronautics and Space Administration (NASA) Physical Oceanography program. It involves scientists from PSL, NOAA's Chemical Sciences Laboratory, Atlantic Oceanographic and Meteorological Laboratory and Pacific Marine Environmental Laboratory, the University of Colorado (CIRES and IRISS), the University of Washington along with several other U.S. universities, the Caribbean Institute for Meteorology and Hydrology, and pilots and crew from the NOAA Office of Marine and Aviation Operations. 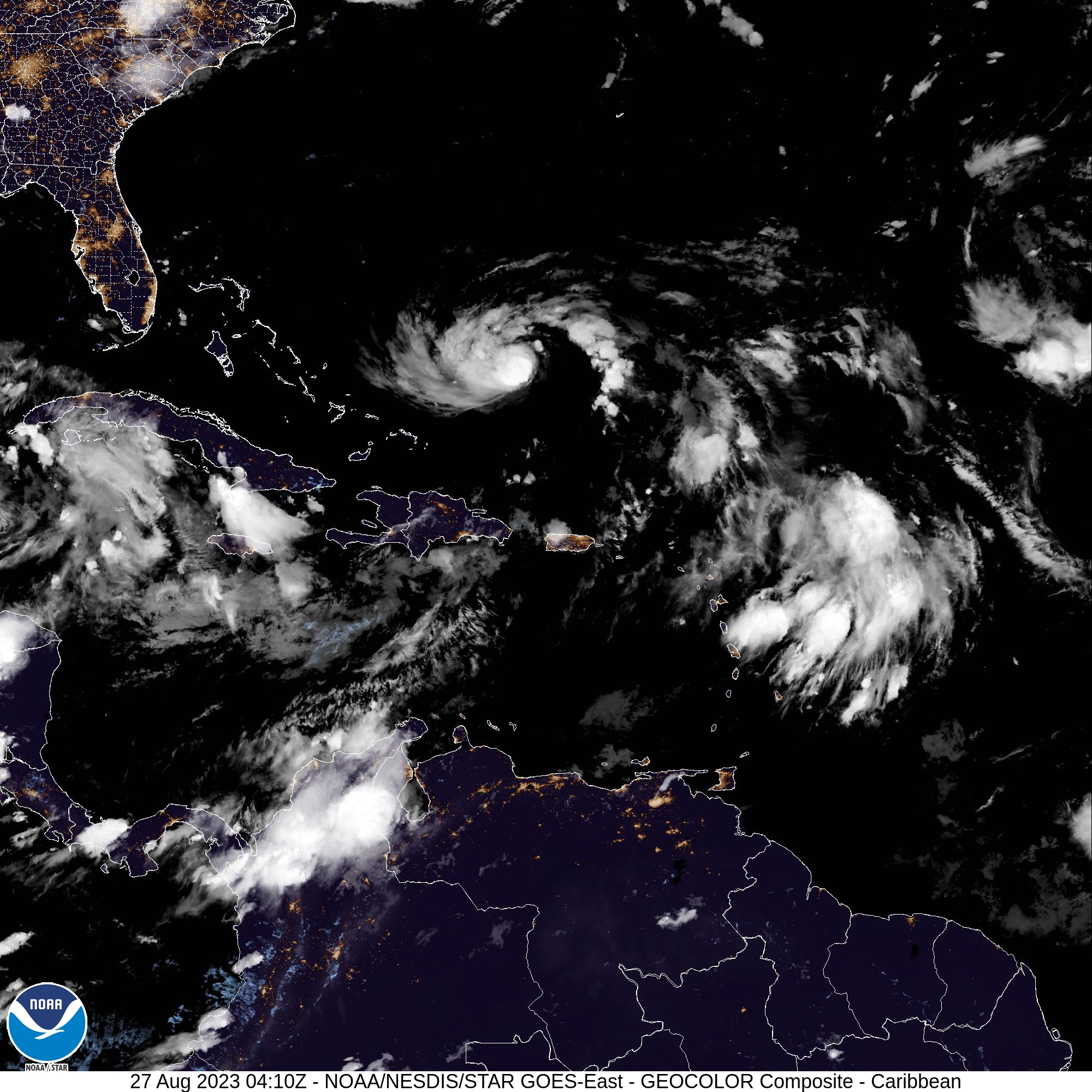 Latest GOES-East Satellite image of the region.
The NOAA ATOMIC field campaign will work with scientists from Europe and the island nation of Barbados to study how the upper ocean and lower atmosphere influence and control the development of marine clouds. Graphic by Carlyn Iverson, NOAA Climate.gov.
Go to Forecast Briefing

A Sea of Sondes

On January 23, we launched our 97th weather balloon – and the last one on this first ATOMIC leg...

We’ve almost completed a week at sea and so much has happened! It’s all in a day’s (and night’s and weekends’) work...

Hello from the Ronald H. Brown! We are now sailing east from Barbados and starting our measurements of the ocean and the atmosphere...

External links to news articles are provided as a courtesy. Endorsement of non-NOAA sites is not implied.

Elizabeth Thompson (PSD) installs equipment aboard the NOAA Ship Ronald H. Brown prior to the campaign.

Sergio Pezoa (PSD) installs the W-Band radar in the belly of the NOAA P-3 aircraft.

Science team members monitor the display information as the CTD rosette makes its way down to a depth of 2,000 meters.

PSD's Janet Intrieri (right) launches a radiosonde from the back of the ship.

A view of the NOAA Ship Ronald Brown from the NOAA P3 aircraft.

Clouds close to the surface of the ocean, called shallow convective clouds, are found around the world – but poorly represented in weather and climate models.

Shallow convection, the effects of clouds on the ocean surface energy budget, and oceanic processes are relevant to a myriad NOAA applications such as climate sensitivity, propagation of the Madden-Julian Oscillations (MJO), hurricane track and intensity, annual movement of the Intertropical Convergence Zone, midlatitude storm tracks, and marine stratocumulus cloud regions. Shallow convection is also an important issue for weather forecast models over land, with implications for convective inhibition and the initiation of thunderstorms or for solar energy forecasting. The oceanic region of interest is the middle of the Atlantic Warm Pool.

For ATOMIC, NOAA brings their unique observing platforms to complement the European field campaign, EUREC4A. NOAA’s science objectives will emphasize energy exchange between the ocean and atmosphere, and cloud–aerosol interactions. It is expected that this work will be done by NOAA in collaboration with the National Science Foundation.

The campaign has been endorsed by the World Climate Research Programme's CLIVAR project.

Area of field operations for ATOMIC/EUREC4A showing 'Tradewind Alley' and the Barbados Cloud Observatory (BCO) central measurement area (the green semi-circle defines the radar coverage). Additional research vessels will contribute to these measurements while also exploring the influence and evolution of ocean eddies that frequently ramble toward Barbados from the southeast along the 'Boulevard des Tourbillons'.